I'm going to meet Shiloh and his "guardian" tomorrow. I'll try to get a video. Hopefully nothing... bad happens.

Still no updates on the code. It's harder to crack than one would think.
Posted by Jake Owen at 9:31 PM No comments:

Cracking the Codes / a Creepypasta

What kind of source? At first I thought it was referring to the source of my problem. But thinking over "Piggy's" cryptic nature, I wondered if it could be more of a code than anything. It's now pretty clear that this thing can mess with me by writing on walls, and if I've learned any genre savviness from my ARG excursions it's that the enemy can mess with your source code.

And that is when I checked the page sources of all the entries with that tag. Lo and behold, hidden in the HTML in comment tags were the following messages:

"he's watching me now. Just keep that in mind. He KNOWS. He SEES."

-A victim, somehow?
-Somebody imitating me?
-Me?
-Shiloh?

It leads to this image: 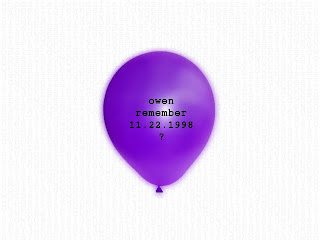 There was no "YouKnowWho01.jpg" or anything of the sort uploaded. So this image is alone. Still, this confirms "the birthday party" is somehow involved. The purple and "whosafraid" repeated in the background are a bit disconcerting.

I'll keep out for more "source" posts, if "Piggy" keeps using them, that is. Does it want the codes to be cracked?

Still no updates on the crayon message. This one is really creeping me out.

There was a hunter in the woods, who, after a long day hunting, was in the middle of an immense forest. It was getting dark, and having lost his bearings, he decided to head in one direction until he was clear of the increasingly oppressive foliage. After what seemed like hours, he came across a cabin in a small clearing. Realizing how dark it had grown, he decided to see if he could stay there for the night. He approached, and found the door ajar. Nobody was inside. The hunter flopped down on the single bed, deciding to explain himself to the owner in the morning.
As he looked around the inside of the cabin, he was surprised to see the walls adorned by several portraits, all painted in incredibl detail. Without exception, they appeared to be staring down at him, their features twisted into looks of hatred and malice. Staring back, he grew increasingly uncomfortable. Making a concerted effort to ignore the many hateful faces, he turned to face the wall, and exhausted, he fell into a restless sleep.
The next morning, the hunter awoke -- he turned, blinking in unexpected sunlight. Looking up, he discovered that the cabin had no portraits, only windows.
Posted by Jake Owen at 8:59 AM No comments:

Written on the Walls

Today around 4:00 P.M. I entered the closet. I think the video speaks for itself.

Piggy was the name of my childhood imaginary friend. Wrap your mind around why the hell that name was written in there. I have no idea. This is turning insane. I'm going to try to make sense of it all. And I'm also going to stay in the light. Goodbye, sleep.

It's written in crayon. If anybody else thinks this is a code, I could use some help.

-It's written in different colors. Perhaps this is a factor in the code, or just there to throw us off.
-"Piggy wants to play" is obviously not code. Or is it? Either way, that's plain English, which could be some part in cracking the code.
-It may not be a code. It's written in crayon and it's the name of my childhood imaginary friend. And it's written in what seems to be the hand of a child (too high up?) so perhaps it IS just jibberish.

I'm going to look further into this and into "source."

Additionally, I am meeting Shiloh and his "guardian" at a Chicago-area mall Saturday. I'm going to need to sort things out, gather questions to ask. I need to make this visit worthwhile.
Posted by Jake Owen at 7:20 PM No comments:

I don't think I was supposed to call Shiloh.

I also don't think I should turn my lights off at night. Or try to sleep. Or sleep in my room.

I was trying to fall asleep, as usual. Watching some weird-ass kid show on TV that looked years old, it was nightmare fuel enough. But then came the scraping noises. At first I thought they were ordinary. But they grew louder, emanating from the wall behind my head. Something was in the hall, or the closet. I turned off the TV and started listening harder. Was this something to fear? I felt like it. I tried to assure myself it was nothing. The wind blowing through and moving stuff around. It was too peaceful outside for that though.

So I sat paralyzed in bed at god knows what hour of the night, not sure what the sound was or where it was, seeing only the worst possible monsters coming to life in my head. Turning the TV off was a bad idea, too. No light, and now I was far too terrified to turn it back on. The scraping seemed to slow then. And then it stopped entirely.

I sat in the dark and silence thinking it was over. Dawn would come, and it would all be over.

Then the closet light went on. Thing is, it would have been far less scary if I had a closet light. Faulty wiring or wild animals or burglars can't turn on lights that don't exist. And flashlights don't logically light up purple. It was safe to say that this was unnatural, and also safe to say that holding back the bile that built up in my throat and darting out of my room and down the stairs was a logical course of action. I spent the rest of the night locked in the bathroom holding a plunger and a pair of scissors for self-defense.

I haven't ventured into my room yet. I also haven't told anybody -- would getting others sucked into this whole thing make it worse?

I'm checking the closet today. In daylight. I'm not living in fear forever, whatever might have been in there.
Posted by Jake Owen at 3:01 PM No comments:

Jake Owen
"He is the Jake."

I am in the middle of trying to solve some sort of mystery. Maybe. I'd love some internet-help, especially considering how little help my friends are being lately.

Here are a few links to pages I find interesting or worth visiting: